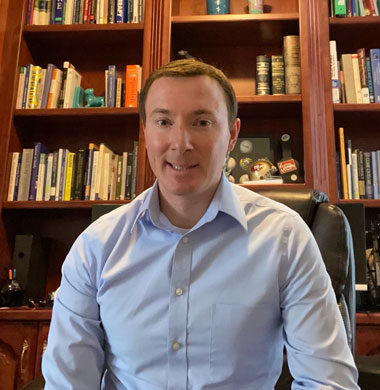 I grew up mainly in Utah County but also in Alaska and Denver, Colorado. I played a lot of baseball and guitar as a teenager and didn’t think much about what I would eventually do for a career. I played guitar in the jazz band at Utah Valley University (when it was UVSC) for a semester, but then realized jazz guitar was way too difficult for me! I also had an interest in foreign languages and looked at careers in International Business or teaching Spanish. However, neither of those directions felt quite right as I felt foreign languages would be a better hobby than career. I immediately became fascinated with psychology when I started taking classes. Since it focuses on behavior, relationships, how the brain works, how to help people, etc., it became an easy career choice for me. I received a bachelor’s degree in Behavioral Science with an emphasis in Psychology in 2006. I kept up my interest in foreign languages and also received a bachelor’s degree in Spanish in 2007.

I was very fortunate to be accepted into the PhD program in Clinical Psychology from Brigham Young University in 2008. While there, I received training from terrific faculty and clinicians in different therapy modalities such as client-centered and cognitive behavioral therapy. I was also a research assistant working on projects involving psychology and health. My doctoral dissertation focused on how social support can relate to cardiovascular health for immigrants. I was also grateful to have been a health psychology intern at the Louis Stokes VA Medical Center in Cleveland, Ohio from 2013-2014 where I completed rotations in chronic pain psychology, addiction recovery with serious mental illness, and primary care psychology. I also completed an enrichment experience in cardiology psychology. In these experiences I was trained to use psychological principles to help individuals with a variety of different conditions to reach health and wellness goals. I was also trained to use evidence-based assessment techniques to reach an accurate diagnosis and create optimal treatment plans. From these experiences I saw that psychological assessment is such a valuable tool for those seeking to better understand themselves and their situation. I’ve been trained in the assessment of multiple conditions ranging from depression to autism.

Since completing my PhD and clinical training I am now an assistant professor at Utah Valley University teaching classes about health and wellness, research, and the brain. What I find so rewarding about both teaching and psychological assessment is you get to be involved in watching people progress towards their goals. I feel very lucky to have a career that fits my interests so well that also benefits the lives of those in my community.